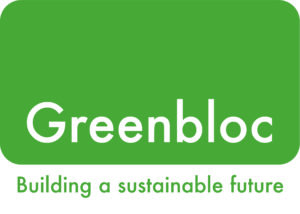 The first cement alternative low to zero carbon concrete block has been launched in the UK today which promises up to 73% CO2savings compared to traditional concrete blocks.

Created in Cambridge, the new sustainable low carbon concrete block, Greenbloc, is being launched by CCP, part of SigmaRoc plc in conjunction with Cemfree. Greenbloc is an ultra-low carbon alternative to concrete blocks made of Portland cement and is designed to help reduce the construction industry’s dependency upon cement – the world’s third highest source of man-made CO2 – as a key ingredient in concrete manufacturing.

Greenbloc, which is being made immediately, is a high-density load bearing nearly zero carbon concrete block made from class 1 aggregates and Cemfree – a totally Portland cement-free alternative to conventional concrete.

Manufactured in Cambridge to BS EN 771 and complying with Part E of the Building Regulations for Walls and Floors, Greenbloc is manufactured, stored and placed in the same way as conventional concrete blocks. With no compromise on strength compared to Ordinary Portland Cement (OPC) blocks, it is suitable for all applications, including foundations, load bearing walls, internal leaves of cavity walls and partition walls.

Michael Roddy, Managing Director at CCP commented: “Greenbloc low carbon concrete is a game-changer for the UK’s construction industry. Up until now, sustainability has all-too-often been focused on operating carbon emissions post-build, rather than the carbon generated during the build schedule and in the manufacture of building materials. Greenbloc’s Portland cement alternative block is an important step in the greening of both construction projects and the wider supply chain, as it has the capability to reduce CO2 by up to 73% on a project compared to OPC. In short, the only difference to OPC is that the Greenbloc zero carbon concrete block has the ability to dramatically reduce carbon in construction.”

Concrete has long been regarded as a key building material despite the fact that its manufacturing process is one of the world’s largest emitters of carbon and CO2. CCP’s own figures suggest that, for an average three-bedroom house, OPC accounts for 3,700 kg of CO2. In comparison, Greenbloc low carbon concrete accounts for just 981 kg of CO2 for the same house, achieved through a saving of 1.0 kg of CO2 per block and adding up to a total saving of 2,700 kg of CO2 per house. Data from the National Energy Foundations suggests that switching to Greenbloc low carbon cement alternative concrete is the equivalent of offsetting the electricity emissions on an average three-bedroom house for an entire year.

Roddy continues: “As a building material, Portland cement cannot be matched; however it remains the source of about 8% of the world’s carbon dioxide emissions*. Greenbloc low-to-zero carbon concrete offers the UK’s construction industry a clear path to a more sustainable future, decreasing the carbon footprint of one of its core building products and the projects it is used in.”

Find out how you can make savings of up to 77% on your next project by switching to Greenbloc powered by Cemfree.