Celebrating National Apprenticeship Week With Our Own Rising Star

With valuable apprenticeships and workplace placements on the decline, DB Group endeavoured to make a small difference by taking on our first apprentice at MPS Concrete Solutions.

Let us introduce Jack, our MPS Site Operative. Jack came to us in September 2016 at 17 years old as an apprentice – he knew he didn’t want to go to university and was keen to get stuck into the world of work. Naturally, with taking on someone under 18, we had health and safety concerns. Plus, we were aware of the likelihood of getting a teenager out of bed for 5.30am!

Many employers are also concerned about employing apprentices due to age related restrictions, such as: number of hours they can work, what types and sizes of machinery they are allowed to operate and various other risk assessment obligations. However, Jack allayed all of our apprehensions from day one. Through the NVQ process, Jack’s confidence grew and grew; he fulfilled his role as Site Operative with proficiency – drilling concrete, training to use pumps and chemicals and completing his digital assessments. Thoroughly supported by his NVQ in Resin & Grout Injection, he completed the qualification in under a year and has now been with MPS for almost 3 years.

A word from Jack… 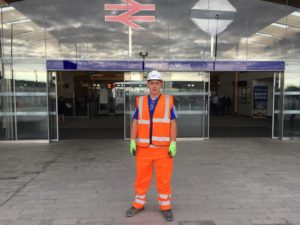 “When I first started my apprenticeship, I felt really welcomed by everyone. During my apprenticeship, I’ve learned a lot. Everyone is willing to help you and teach you everything you need to know about the job. It has given me a good start to my career with the company.”

By engaging an apprentice at a young age and in the early stage of their career, a company is able to instill a reliable work ethic. Jack was taught the internal workings of our structure from the offset, enabling him to grow into the perfect fit for our team. In the almost 3 years Jack has been with us, he’s developed essential skills and is on the brink of running his own team. An apprenticeship has offered him both a leg up in his career, and a valuable NVQ qualification.

Taking on an apprentice is easier than ever before. Assessments are simply submitted online, in the student’s own time – in Jack’s case, this meant that he completed his course within 1 year. On-site assessments are fitted around the apprentice, ensuring that their work is not disrupted and there is no inconvenience to the employer.